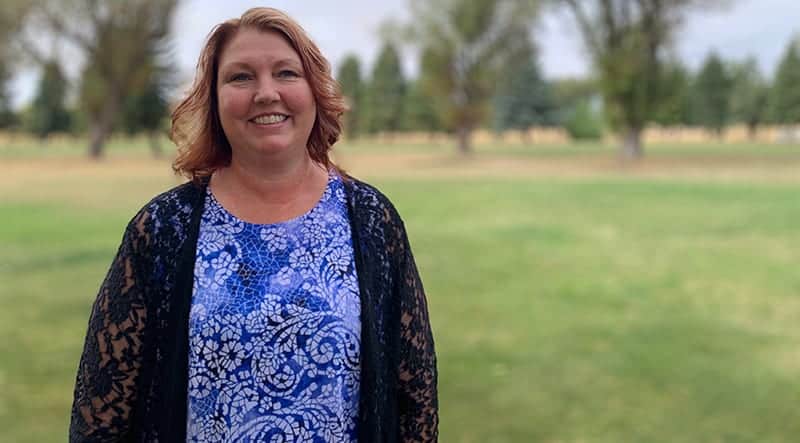 This story appears in the 2019 fall/winter edition of Connections Magazine.

There were days when all she could do was count the ticks of the clock’s second hand.

She lay in bed too sick to move. Every tick an eternity.

“That’s how I would get through my days,” Troy resident Heidi Heath said.

The 44-year-old mother of two was fighting for her life, but the days eventually got easier.
And after six rounds of chemotherapy, a double mastectomy, 33 consecutive days of radiation therapy and a total hysterectomy, Heidi has now been free of breast cancer for more than three years.

No one should face cancer alone, and fortunately Heidi had a support network of friends, family and her advocates at Gritman Medical Center, including the staff in the Women’s Imaging Center — described by Heidi as “always so caring and compassionate” — and in the infusion clinic who helped her through her chemotherapy treatments. And she will never forget the amazing foot massages from the Light a Candle volunteers.

“Just that kindness, it really made a difference,” Heidi said.

The day that changed everything

Heidi had a routine mammogram in January of 2015. The results were normal, so she saw no reason to worry when three months later she felt a lump on her chest.

In June, she mentioned the lump during her annual physical at Moscow Family Medicine. Her primary care physician, Dr. Helen Shearer, was immediately concerned, and Heidi was sent across the street to Gritman’s Women’s Imaging Center.

Two days later, on July 1, 2015, she got the diagnosis: Stage 2 invasive lobular carcinoma.

“I was sitting in the room and Dr. Shearer walks in and says, ‘Well, it’s cancer. I don’t know how to sugar coat it,’ ” Heidi said.

Heidi’s thoughts immediately went to her family — her husband, Jason; her daughter, Hanna; and her son, Tyler. “I started crying, and I thought, nope, I’ve got to be tough,” Heidi said.

By mid-August Heidi started chemotherapy. Every three weeks she would begin a new round of treatment.

The first week after a treatment was always the worst. It was a “deep-down-in-your-soul kind of sick.”

“Thursdays were really bad days,” Heidi said. “Every Thursday after a chemo treatment I would end up in the (Emergency Department at Gritman for IV treatments). They took such get care of me.”

Heidi usually received seven straight days of IV fluids, and she would begin to feel slightly better the second week after chemo. By the third week she was able to return to work for short periods — just in time to begin another round of treatment.

“The chemo treatments were nasty. They were definitely the hardest part of the whole journey,” Heidi said. “But you get through that. Then you get up and you go to work, whether it is for half an hour or whatever. Then you go to your kid’s game. You do what you have to do.

“You get up and you keep moving forward — and you cannot let your mind go to that place of why me, or I’m going to die. You have to push forward.”
Heidi is grateful she was able to receive her chemotherapy and other treatments so close to home at Gritman.

“I don’t know what I would have done if I couldn’t have gone to Gritman,” she said. “That would have just been way too much. It was nice that I could be home and still go get taken care of too.”

Heidi was surrounded by caring family and community. Friends and co-workers helped with meals and provided encouragement, and her mother traveled up from Riggins to help during the worst of the chemotherapy.

Heidi also had the support of the Gritman Foundation Light a Candle Program, which helps cancer patients with services like housekeeping, grocery assistance, massage therapy, travel expenses and more.

“This was a crazy roller coaster with so many ups and downs, but one of the ups was learning about the Light a Candle Program offered by Gritman,” Heidi said. “It was so easy to register and always cheered me up when it was time to stop by and pick up my gas or grocery cards. Every time I had to put gas in my car and I had a gas card from Light a Candle, I always felt so thankful.”

And those massages, they weren’t so bad either, as Heidi detailed when she spoke at Chicks n’ Chaps, an allwomen rodeo clinic that teaches the sport of rodeo while raising awareness and money for local breast cancer patients and their families.

“One day I was sitting in the infusion room in Moscow (at Gritman) and the patient next to me was getting a foot massage and I thought how wonderful that would be right now. The therapist asked me if I would like a massage, and I said, yes, I would, but I can’t afford it. She smiled and said there was no charge — it was part of the Light a Candle Program.

“Those things might be small in the grand scheme of things when you are going through treatment but they stand out to me as bright spots in a long journey.”

Heidi was declared cancer free about a year after her diagnosis. She has been able to return to doing the things she loves, spending time with family, golfing, archery and volunteering in the community.

Heidi encourages other women to get annual mammograms and do self-checks.

Like many who have shared a similar experience, her outlook on life has changed. She appreciates every tick of the clock and tries to not sweat the little stuff or let the “noise get in the way” of what matters most.

“Friends and family,” she said, “that’s the most important thing.”

As a nonprofit community hospital, Gritman Medical Center publishes Connections magazine twice a year to keep you informed and up-to-date with everything that’s happening in our hospital and regional network of clinics.