He nearly lost a limb, but Gritman helped him learn to live with diabetes and beat expectations 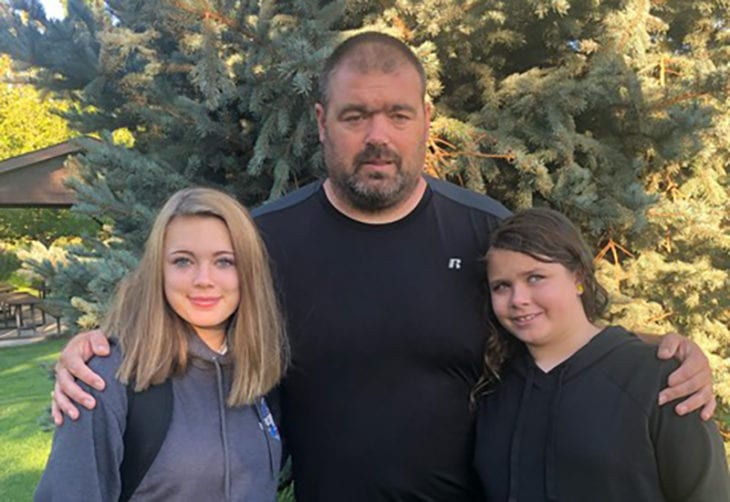 Two days was all it took for a callus on Silas Robbins’ foot to progress from a minor wound to a raging infection.

By the time the Moscow resident sought care at Gritman Medical Center’s Emergency Department doctors were fearful the foot would need to be amputated. Silas was immediately rushed into the Medical Surgical Unit for surgery with Dr. Brad J. Capawana, who specializes in podiatry, a medical specialty that focuses on the diagnosis, treatment, prevention and management of diseases and injuries to feet, ankles and lower limbs.

Fortunately, the foot didn’t need to be amputated, and Dr. Capawana was able to clean out the infection.

“Really, I would not have my foot if it were not for Gritman,” Silas said.

Silas’ road to recovery, though, was just beginning, and it required roughly a month in the hospital and major changes to his lifestyle. Unknown to Silas, he had been living with diabetes for some time. His condition made what should have been a minor wound into a medical emergency.

“During the time I was at Gritman the whole staff was awesome, all the way down to the people who helped keep my room clean. Everybody showed that they cared,” Silas said. “Everybody was in my corner working hard to make sure I was at the point where I could go home.

“A lot of the nurses, you see them so much you get to know them, you get to learn about their families, they learn about yours, they just never look down on you and they always treat you with respect – I haven’t always had that experience with nurses and doctors.”

Despite the successful procedure, Silas was not out of the woods and still faced a high risk of infection, which could once again put his foot at risk. He was also told there was a 90% chance one of his toes would have to be removed.

Doctors warned Silas he was facing nine to 12 months of recovery time. Silas was referred to Gritman’s Wound Healing Center – and he exceeded all expectations.

“Four months after my surgery I was released from Wound Care and basically considered healed,” Silas said. “I can’t believe that four months after this happened I was pretty much healed when they were giving me almost a year to heal. Two factors were the care I had at Gritman and my willingness to do whatever needed to be done, no matter how uncomfortable, no matter how painful.”

“Every day I went in they made me feel part of their family, they made me feel good about my progress, they did everything to make me comfortable,” Silas said. “I know they said a lot of my recovery had a lot to do with me and doing everything they asked me to do, but I honestly don’t think I would have recovered nearly as fast without Wound Care – it was amazing what they did.”

Just as important to the wound healing was Silas making lifestyle changes to control his diabetes. Gritman was again there to help. Silas routinely met with dietitians and educators from Gritman’s Clinical Nutrition and Diabetes Care departments to help him manage the disease.

“I was concerned at first, but everyone was so patient and helpful that it eased my concerns. I left the hospital not only with my sugars under control but with a plan moving forward,” Silas said. “Obviously for me to heal, the diabetes was probably the biggest thing to get under control. It wasn’t them just doing it for me – it was them teaching me how to do it, teaching me about my diet, warning signs, pretty much everything I needed to be safe once I got home.”

In the months since Silas has left the hospital, he has worked to manage his diet and lead a healthier lifestyle. In just a three-month period, his blood sugar levels have dropped dramatically.

“That is all attributed to what I learned in the hospital,” Silas said. “Obviously it is going to be something I am going to have to take care of the rest of my life, if I want to live anyway.”

Silas wanted to share his story so others would be aware of the signs of diabetes.

“Check yourself for diabetes – it is so simple to go get your finger pricked,” he said. “I would never have guessed that I would have had to deal with diabetes. A lot of people think they are just getting old, but they need to get themselves checked – I wish I would have. Now that I know what the signs are, I was definitely showing symptoms for at least a year or two.

How Gritman can help