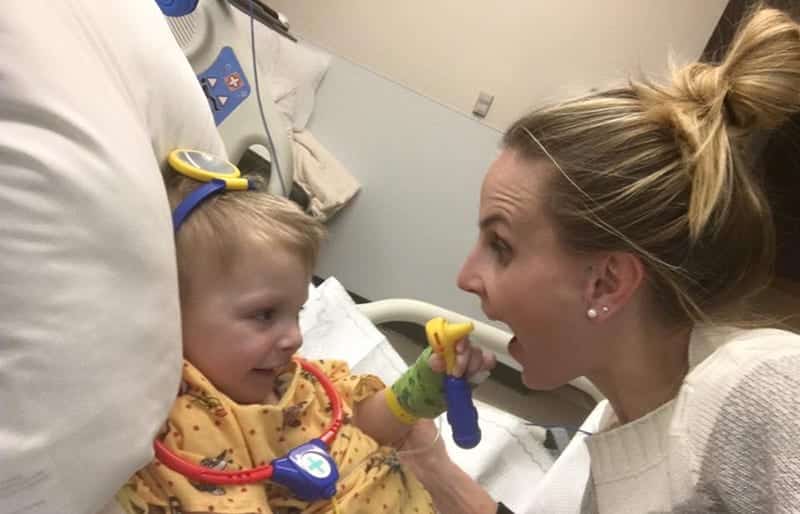 Casen and his mother, Katie Hawkins

On some days Casen Hawkins could be mistaken for a normal 6 1/2-year-old boy.

He loves toy trains and cars.

He’s always up for wrestling with his older brothers.

He can ride a bike — even if like many children his age he still uses his training wheels as a crutch.

But all is not normal. At age 4, in April 2017, Casen was diagnosed with Batten disease, a rare and fatal condition caused by a genetic mutation that disrupts the ability of cells to dispose of waste. For affected children, the disease leads to developmental and physical regression and, ultimately, death, usually by the age of 10. There is no cure.

Gritman Medical Center has been along for nearly every step of Casen’s journey. Early on, Casen was frequently treated in the Emergency Department, and today he visits at least three days a week for therapy sessions that have made it possible for him to do normal kid things his parents were told he never would. 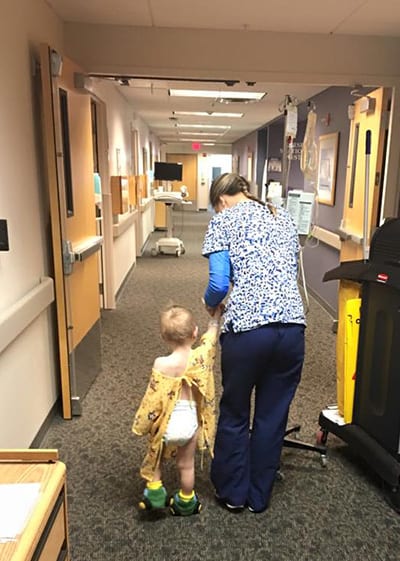 Casen takes a stroll with a nurse through Gritman’s Medical/Surgical Unit.

“You know the saying, ‘it takes a village’?” Casen’s mother, Katie Hawkins, asked. “(My husband) John and I are both Moscow transplants and when Casen was younger, we had no family in town to help. The early weeks, months and years of having a child with considerable medical needs and no clear idea of what was going on were some of the most isolating, difficult and overwhelming periods of our lives. But, almost instantaneously, the medical community from Gritman became our ‘village.’ Casen continues to defy the odds and I am absolutely certain he would not be where he is today without the collective effort of our Gritman village.”

Batten disease has 14 variants, with Casen’s being CLN14. It is believed he is the only child in the United States with CLN14. Casen suffers from myoclonic seizures (brief shock-like jerks of a muscle), developmental regression, ataxia (a degenerative disease of the nervous system) and vision impairment. Eventually, he will lose the ability to walk, talk and breathe on his own. Death will likely come from a secondary infection or demise of the brainstem.

In many rural areas a family would be forced to move or frequently travel to an urban area to have access to the best care, but that’s not the case for the Hawkins.

Casen, the third of four children for Katie and John, was born premature at Sacred Heart Medical Center at 30 weeks on Jan. 3, 2013, weighing just 3 pounds, 3 ounces. Katie’s uterus ruptured during the delivery, and Casen nearly died before spending his first 58 days in the neonatal intensive care unit. It was also soon discovered Casen had congenial scoliosis. 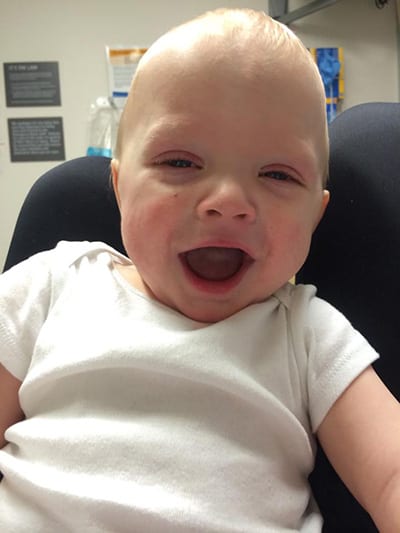 Casen is “probably the happiest little kid you will ever meet.”

His early struggles aside, Casen appeared to be healthy overall until three months after his first birthday when he was hospitalized with encephalitis, or inflammation of the brain.

And then, Katie said, “nothing was the same.”

“When he was learning to crawl he would crawl a little bit, and then he’d go splat,” she said.

Those tumbles, it turned out, were being caused by Neurontin. That diagnosis came from specialists at the University of California-San Francisco Medical Center just before Casen’s third birthday. A year later came the Batten disease diagnosis.

It has been an up-and-down journey since, but even with his medical issues, Katie says Casen is “probably the happiest little kid you will ever meet.”

And that happiness is infectious.

“He connects with people and makes people feel happy,” Katie said. “He has absolutely no personal space — there’s no bubble. He will get right up in your space, but in a way that just makes you want to take him home with you.”

This past March, however, Casen’s health took a dramatic downturn. He was no longer the carefree boy with the infectious smile. He was not talking or responding to others, and the worst was feared.

An EEG performed at UCSFMC showed high and abnormal amounts of brain activity, signifying Casen was suffering from nearly constant seizures despite being on three anti-epileptic drugs. Casen was given a fourth and new anti-epileptic drug and, Katie said, a meeting to prepare for end of life care was set for the following day.

Casen had other plans.

“On the day of the meeting I woke up (in his hospital room) to a call light being pressed. I thought his knee hit it or something,” Katie said, adding when a nurse came in to the room she heard a child’s voice say, “I need help. … I need you to bring me some milk.”

It was the first words from Casen in two days.

The new medication has worked remarkably well, and Casen’s seizures have been under control since. 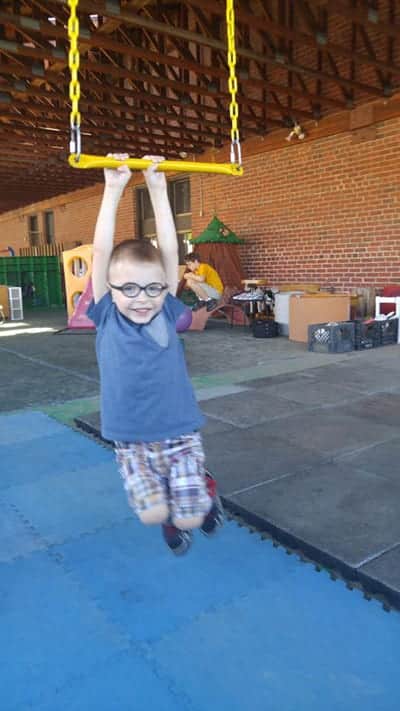 Casen loves his time on the playground.

“This is the most functional he has ever been,” Katie said. “This is a kid with a condition in which he was never ever supposed to be able to do things like riding a bike. It is just amazing.”

Every week Casen still makes several visits to Gritman, where he is a favorite of staff and physicians, like Dr. Musa Modad and Dr. Randall Kloepfer, both of whom went above and beyond in ensuring Casen received the best care possible.

“Dr. Kloepfer saw Casen countless times in the ER. He showed a level of care, compassion and concern for Casen that extended beyond the interactions inside the ER,” Katie said. “If we ran into him elsewhere in the hospital or in the community, Dr. Kloepfer would check in on how Casen was doing.”

Dr. Kloepfer also was instrumental in helping the Hawkins learn as much as possible about Casen’s rare condition. After Katie expressed frustration about the lack of information she was able to find online and not being able to read the latest reports in medical journals because of subscription blocks, Dr. Kloepfer took matters into his own hands.

“At Casen’s very next hospitalization, not only did Dr. Kloepfer stop by his room to check in, but he also had a stack of paper for me — it was all of the journal articles printed out, as well as the results from his own research on UpToDate (an online resource to find the most current medical information),” she said. “That small gesture allowed me to see that we were not alone in navigating this disease with Casen.”

As for Dr. Modad, Katie said his expertise and persistence “saved Casen’s life.”

Casen is a regular at Gritman’s Therapy Solutions, participating in physical, speech, feeding and occupational therapies and taking part in the Explorers with disABILITY program, which gives him opportunities to fish, rock climb, ride bikes and get some time with horses – which he would love to take home, if only Mom would agree.

“All of those have allowed Casen to walk, run, climb, ride a bike, talk,” Katie said. “This is a kid who couldn’t walk, and now he is climbing,” she said as she looked at pictures of him scaling playground equipment.

“We were told Casen would never be able to write his name, and with the help of Gritman and Occupational Therapy, not only are we writing our name, but we are coloring now,” she added as she flipped to a photo in her cellphone showing the aftermath of one of Casen’s “coloring sessions” on the interior walls of their home.

From day one, Katie has been impressed with the entire Gritman family, from the members of the food service team to the lab technicians who can’t say no when Casen asks for “two toys” after a blood draw. Staff in Gritman’s Therapy Solutions has also stood out. Occupational therapist Courtney Bean, speech pathologist Jeanne Clothiaux and physical therapist Lori Mages “have worked in magical ways to push Casen above and beyond the limitations of his disease.”

“The stuff that Lori has pushed Casen to do is amazing. It is not just Casen, it is all of these kids,” Katie said. “They try to say, ‘I can’t do this,’ and she says, ‘yes you can, get back up and you are doing it.’ She sets the bar really high for these kids and they meet it.”

There’s been plenty of times Katie has asked, “why Casen?” But she and John have remained strong for him and their other children. It is their only choice.

“In order to function as a human being and a parent to three other children, and a wife, and an attorney, it is a lot of compartmentalizing. Lots of tears have been shed, and lot of ‘why him?’ stuff,” Katie said.

“Just because these are the cards you were dealt doesn’t mean your whole life has to end. I think about what if we didn’t have Casen — what would that look like? I could tell you we would have way less laughter, way less understanding of what it truly means to live each day like it is your last — everybody could learn from that.” 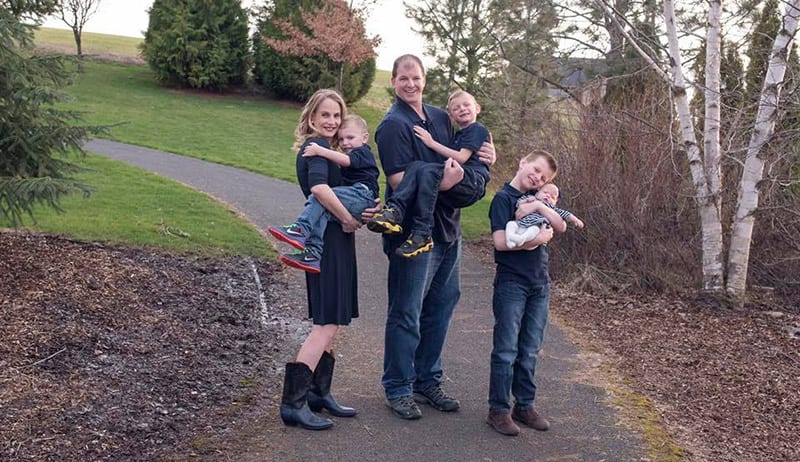