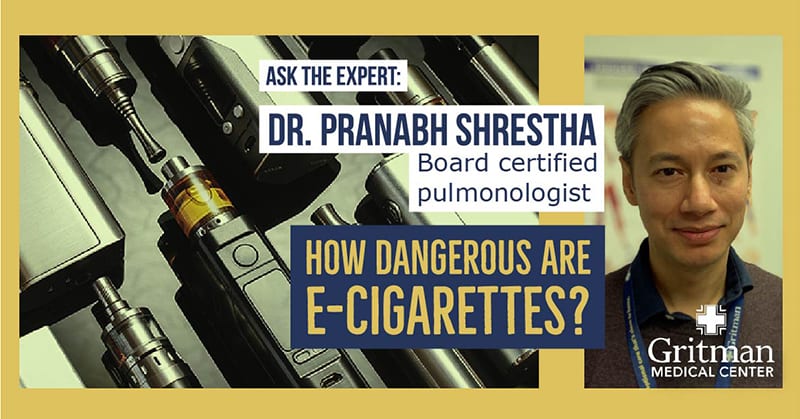 According to the recently-released 2019 National Youth Tobacco Survey conducted by the Centers for Disease Control and Prevention and the Food and Drug Administration, roughly 5 million middle and high school students reported having used e-cigarettes in a recent 30-day period. The report found nearly 1 million of the students reported daily use.

We recently reached out to our board certified pulmonologist, Dr. Pranabh Shrestha, to discuss the dangers of e-cigarettes.

Answer: Not necessarily. In some instances, it can cause rapid respiratory illness and even deaths.

Q: What are some of the possible short– and long–term effects of vaping?

A: The long-term health effects – like the risk of cancer and cardiovascular disease — of vaping are not known. Over the short term, there has been a growing number of health concerns, including very serious lung problems. These problems are called e-cigarette, or vaping, product use associated lung injury (EVALI). As of Dec. 27, 2019, 55 deaths and 2,561 cases of hospitalization related to e-cigarette use or vaping have been reported, according to Centers for Disease Control and Prevention. Symptoms of EVALI include shortness of breath, cough, nausea, vomiting, headache, chest pain and dizziness.

Q: What concerns do you have about teenagers and e-cigarette use?

A: We have seen increasing use of e-cigarettes among adolescents. In 2019, more than 1 in 4 (28 percent) high school students and almost 1 in 10 middle school students reported current use of e-cigarettes. E-cigarettes are available in several tantalizing “flavors” with names that seem to target the taste of children, such as bubble gum and cotton candy. Specific concerns about vaping by teenagers include:

Q: Should parents talk to their kids about the dangers, and, if so, how should they go about it?

A: In my opinion, parents should talk to their kids about dangers of vaping. Because of vigorous marketing and advertising campaigns, there has been increasing use of e-cigarettes by minors and adolescents. Vaping should be discouraged in the same way as conventional cigarette use. The parents should let their children know about the increasing number of hospitalizations and deaths related to vaping. E-cigarettes can lead to nicotine addiction and subsequent tobacco use.

Q: Is there anything else you would like to add?

A: A recently signed law now prohibits the sale of tobacco products, including e-cigarettes, to anyone under 21. Moreover, there is now a ban on some e-cigarettes flavors. In addition, e-cigarettes have not been approved by U.S. Food and Drug Administration as smoking cessation tools. Sustained pressure and vigilance from the public is needed to ensure that health related effects of e-cigarettes do not reach the same dangerous level as the recent opiate problem.

Learn more about our pulmonology clinic at gritman.org/pulmonology, or call 208-883-6779 to schedule an appointment.

What to learn more about the dangers of e-cigarettes? Get the latest information from our online clinic.