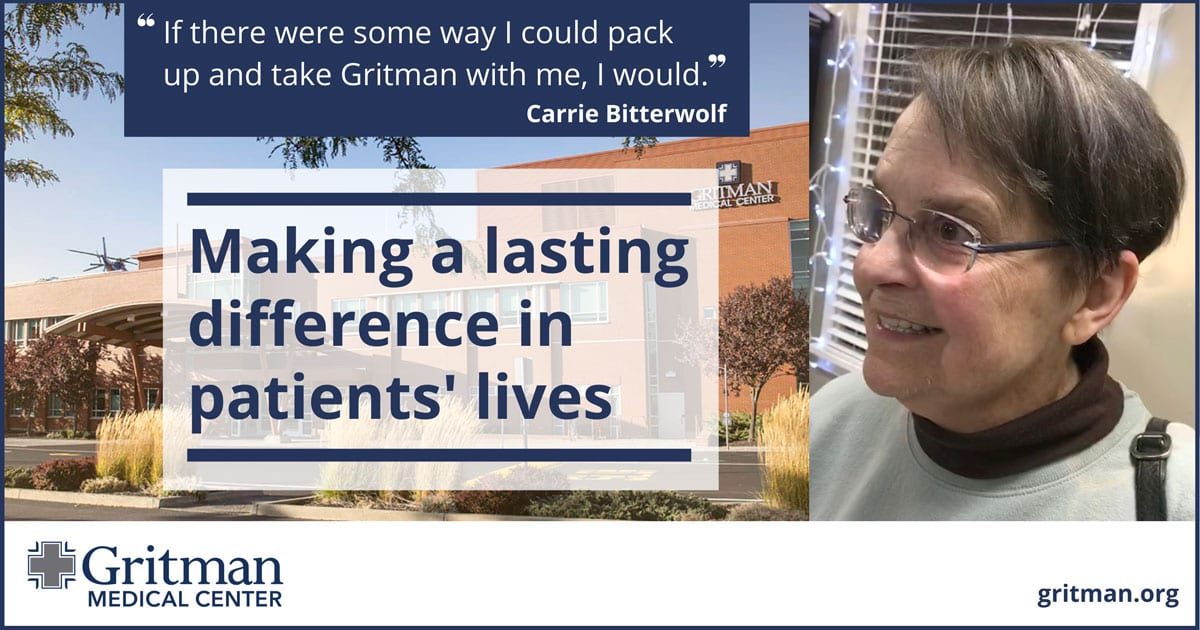 ‘If there were some way I could pack up and take Gritman Medical Center with me, I would’

For more than three decades, our hospital and growing network of clinics have compassionately cared for the now-retired elementary school teacher and her family. So it will be bittersweet when Carrie says goodbye to Moscow later this summer and heads south to be closer to her grandchildren.

“I am in the process of moving to South Carolina, where I am told there are excellent medical facilities, but if there were some way I could pack up and take Gritman with me, I would,” Carrie said.

Carrie’s most recent visit to Gritman came in February when she scheduled an appointment with Carolyn Shoemaker, PA-C, at our Internal Medicine clinic for back pain. After an examination and tests, it was determined Carrie needed to have gallbladder surgery. Dr. Nancy Panko, a general surgeon with Palouse Surgeons, later performed the surgery at Gritman.

And, just as importantly, everyone was friendly and caring.

“We have been in Moscow for 33 years,” Carrie said. “Every time I’ve been to Gritman the staff always have big smiles, they know what they are supposed to do, and they put you at ease. Everybody is there to help you, so that whatever is going on you are as comfortable as you can be.”

For Carrie, she felt as if she has always been treated as “family” at Gritman.

“The nurses and staff take the time to get to know you, so when you go into the clinic, you are not just the 10 o’clock appointment,” she said.

The surgery went great and Carrie is fully recovered and preparing for her move. Her amazing experience is typical of what she has come to expect at Gritman.

One of the most difficult visits Carrie made to Gritman was in January of 2019 after she received a call notifying her that her husband, University of Idaho chemistry professor Thomas E. Bitterwolf, was experiencing shortness of breath at his office and would be transported to Gritman. Carrie rushed to the Emergency Department to wait for her husband’s arrival.

“By the time I got to Gritman they had already pulled his records and they were waiting for him. I think that was fantastic – they were waiting and ready,” Carrie said. “But he never made it to Gritman. He died where he wanted to. He said the only way to get him out of the chemistry building was feet first.”

The great and compassionate care throughout the years has definitely left a mark on Carrie.

“My family has utilized the Internal Medicine, Psychiatric, Emergency, Women’s Imaging and Same Day Surgery departments and clinics, as well as the cafe numerous times, over the years, and we have never been disappointed in the quality of care we received,” Carrie said. “I’m going to miss Gritman, I really will.”