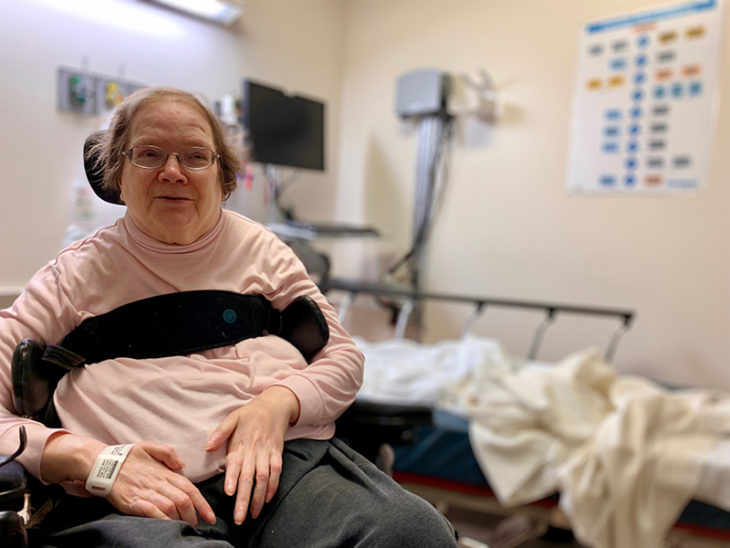 For more than two years Mary Muench received treatment at a medical facility in Spokane for a wound – and for two years the ailment only worsened.

By the time she sought treatment at Gritman Medical Center in December of 2017, the wound had penetrated into her sacrum,  a triangular bone at the base of the spine. Staff at Gritman’s Wound Healing Center was honest in their assessment – the wound was life-threatening.

“In my head I am always positive, so I didn’t realize I was that bad,” Mary said.

Half a year later, Mary had made a remarkable recovery. 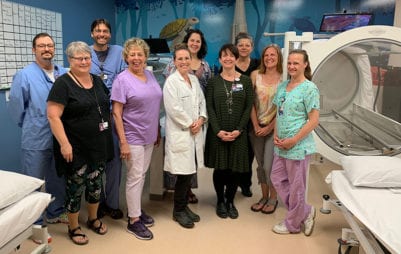 Members of Gritman’s Wound Healing team are shown with the hospital’s hyperbaric chambers. Gritman has two chambers, including one designed to accommodate larger patients.

“I had been at another wound clinic for two years and it just was not healing, was getting worse, and I came down here and in six months they had it healed,” the Pullman resident said during a recent checkup at Gritman. “I’ve had a wonderful experience here.”

Mary, now 69, has been paralyzed from her clavicles down since July 13, 1993, when her spinal cord was crushed in a car accident.

Mary was living in Spokane when she first sought treatment for her wound, however, in late 2017 she moved to Pullman to be closer to her daughter, who works at Washington State University. Mary admitted she was initially worried about the medical care she would have access to on the Palouse.

She now knows those worries were unwarranted, and the move turned out to be a blessing – one that likely saved her life.

“I think they care more at Gritman. The people, I have never heard a negative word spoken here, everyone is positive and friendly. I think that helps in the healing process. The energy they project throughout the whole staff, I don’t know if it is in the water here or what,” Mary said. “I’d recommend Gritman to everyone.”

“When you have someone come in and they are so traumatically injured you wonder can we fix this?” Cofre said. “What we usually convey to the patient is we are going to do everything possible to help you heal, but we encourage them at the same time to play a part in the healing.”

Mary was the perfect patient and did everything she was asked. Her treatment ultimately included the removal of portions of bone and damaged tissue, ultrasonic mist therapy, hyperbaric oxygen treatment, skin substitutes and Augmentin.

“When you have a patient who is willing to do what it takes to get themselves healed it is a huge help to us and themselves,” Cofre said. “We did our part, she did her part, and it worked out perfectly.”

Mary has been healed for some time now, and that means she no longer needs to consistently see the staff at the Wound Healing Center.

“You just really start to miss the people, you become attached,” Mary said.

The staff also miss their patients, many of them who spend three to five days a week in the clinic while recovering.

“You develop a bond with them and they learn to trust you – you become part of their everyday life, and you are with them through their journey to get healed. It is something they don’t forget, and it something we don’t forget,” Cofre said. “It is wonderful watching somebody go from having this horrible wound when they come in to leaving through our door with a smile on their face because they are back to the life they had before the injury and they are so grateful. It is so gratifying for us to know that we helped them do that.”